You will be logged off in  seconds due to inactivity.

A short chromatographic column installed ahead of the separation column and packed with the same material as the separation column. The purpose of the guard column is to trap strongly or irreversibly adsorbed sample components and microparticulates which would otherwise damage the column.

The preparative technique of collecting only the center of a chromatographic peak. Sample purity is at its maximum here. It is also used in column switching.

The bubbling of helium through the mobile phase to remove dissolved air.

The bubbling of helium through the mobile phase to remove dissolved air.

High Performance Liquid Chromatography (HPLC) is a chemical separation technique which separates molecules based on the interaction of solute molecules with a solid stationary phase (typically silica, chemically modified silica, Alumina or a polymer) and a liquid mobile phase. The separation is usually based upon hydrophobicity, hydrophilicity or ionic interactions. Ideally, different components in the mixture are separated from each other as sharp peaks.

Refers to gradient systems that mix the eluents after the pumps. (ie the high pressure side of the pump.) A separate pump is required to meter each solvent composition, and an electonic gradient controller varies the flow rate of each pump to deliver the desired proportion at the selected (total) flow rate. Highly dependent on the flow rate accuracy of the individual pumps, (especially when proportioning low percentages at low flow rate) and can be less reliable than low pressure mixing systems because of the mechanical dependance on more than multple pumps, seals, check valves, etc. 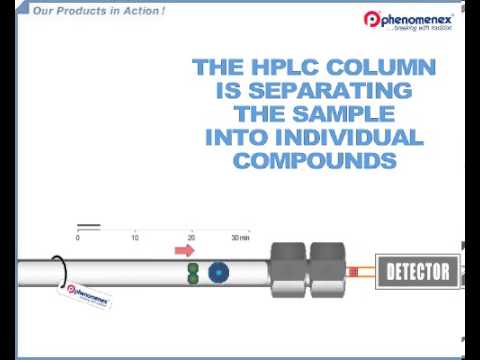 In Mass Spectrometry, the vacuum required for ions to move freely in a mass spectrometer. This pressure range is 10^3 Torr and below.

A commonly used high vacuum gauge in Mass Spetrometry that collects ions on a neutral collector wire and electrons on a grid. The current produced on the collector is measured by a current meter.

Integral - A sinlgle unit comprising a built in pump, detector and injector and sometimes data handling

modules Isocratic - A system containing one pump with th ability to deliver one eluent.

Gradient - A system comprising the ability to deliver varying mixtures of more than one eluent.

High Pressure Gradient - a gradient system requiring one pump for each eluent.

mixtures up to four eluents

Automated - a system with an auto injector/ autosampler

A reciprocating piston pump which has two pistons but only two check valves, like a single piston pump. The two pump heads usually work in series; the master head having a constant slow suction stroke and pulsed delivery, the second (auxilliary) head having a rapid fill stroke absorbing the pulse and then metering a constant flow delivery. This type of pump is often employed in single pump, low pressure mixing systems in conjuction with proportioning valves.

Chemical association with water molecules. Hydration of an unmodified support surface such as silica or alumina deactivates the support. Many solutes that are polar or capable of hydrogen bonding have water of hydration associated with them.

A loose bond between two molecules. In HPLC in general, and in chiral chromatography in particular, hydrogen bonding plays an extremely important role in stationary phase interactions, retention and selectivity.

Meaning water-loving, hydrophilic refers to stationary phases that are compatible with water and in general to water soluble molecules. Hydrophilic columns are used to separate proteins and they should not sorb or denature the protein in aqueous surroundings.

Meaning water-hating, hydrophobic refers to stationary phases that are not compatible with water and to molecules in general that do not like water. Hydrophobic molecules have few polar functional groups. Most are hydrocarbons or have a high hydrocarbon content.

Is a technique where reversed phase packing material is used to separate molecules by the interaction between the hydrophobic moieties and the hydrophobic sites on the surface. High salt concentrations are used in the mobile phase. By changing the concentration of salt by using a salt gradient, the separation is achieved. This method is similar in nature to 'salting out' molecules from solution. Gradients are run by decreasing the concentration of salt over time.

A crystalline form of calcium phosphate, Hydroxyapatite is a support material used for the fractionation and purification of eg., proteins, enzymes, nucleic acids, viruses and other macromolecules.

Solvents that are insoluble in one another, (except at extremely low concentrations) which form a two phase system when mixed.

Term referring to chemical crosslinking between the polysaccharide and silica supports of a polysaccharide CSP which in turn provides strong solvent (THF, DCM, MtBE, Ethyl Acetate, etc.) robustness compared to coated phases and prevents the phase from being dissolved in strong solvents.

A stationary phase immobilized on the support particles, or on the inner wall of the column tubing.

Inclusion complex, as used in chiral chromatography, refers to the (short-lived) complex formed when an enantiomer fits into the molecular cavity of the chiral stationary phase (CSP). There are two common types of CSPs based on inclusion mechanisms:

1. Cyclodextrin: The cyclic glucose structure of cyclodextrin, comprised of 6, 7 or 8 glucose units, forms the shape of a hollow truncated cone. Inclusion complexes with chiral solutes can form with a high degree of selectivity. A combination of hydrogen bonding (around the mouth of the cavity) and hydrophobic forces (in the interior of the cone) hold the enantiomer in place. Pirkle-type interactions are also possible via acetate or carbamate derivatives of the exposed hydroxyl groups. The enantiomer which forms the most stable complex with the cyclodextrin stationary phase is the one retained on the column longest. Cyclodextrin stationary phases also make highly selective columns for certain achrial separations, where, eg., a diol column might be used.

A detection technique which utilizes a UV detector to detect negative peaks. Negative peaks are caused when sample bands passing through the detector are less responsive than the background (baseline) signal of the mobile phase. For example, mobile phase solvents or additives which absorb strongly in the UV-visible range may be employed. Zeroing the detector after column equilibration will result in a negative or "vacancy peak" when lower-absorbing analytes pass through the detector. Under these conditions, detection is referred to as "Indirect UV". In ion chromatography, the addition of eg., hydroxybenzoic acid, a strongly UV-absorbing compound, to the mobile phase results in vacancy peaks for the analysis of anions.

The process that places a sample of a given volume into the flow stream and carries the sample to the column.

The device in a chromatograph that injects a small volume of sample into the eluent stream.

The part of the column where solvent and sample are injected. There is an inlet frit which holds the packing material in place and, in some columns, protects the packed bed. Inlet also sometimes refers to the point at which mobile phase is drawn into the chromatograph by the pump, ie., the mobile phase reservoir inlet.

The check valve on an LC pump that allows mobile phase to flow from the reservoir to the pump, but not in the reverse direction.

10-micron frit attached to the inlet lines to the pump that filter the mobile phase entering the pump and help anchor the inlet line in the reservoir.

A filter placed between the pump and the injector, preventing particles damaging the column.

This type of detector measures the accumulated quantity of sample component(s) reaching the detector.

A filter built into an instrument component such as the pump or the injector.

The process of quantitatively measuring the area under a chromatographic peak using a device known as an integrator.

One of a set of numbers used to control how an integrator or data system carried out peak integration.

An instrument in HPLC, GC or capillary electrophoresis that takes digital output from the detector and uses it to plot peaks. Integrators also print retention times, integrated peak areas as well as other information. Integration parameters can also be stored for future analyses.

Used to introduce the sample components from a liquid chromatograph into a mass spectrometer. Some common types of mass spec interfaces are: Thermospray, electrospray, chemical ionization.

This refers to the diameter of the volume inside a column.

A term used in Mass Spectrometry for the measured signal strngth, expressed in counts (an arbitrary unit related to the mass sperometer's electronics), associated with a particular m/z value.

A plot of the abundance of a given mass-to-charge ratio (ion) versus time or scan number. When all ions are used to generate this plot, it is known as a total (or reconstructed) ion chromatogram.

Is a method of ion exchange where low concentrations of anions or cations are determined using low capacity ion exchangers with weak buffers.

There are two types of ion chromatography. Suppressed IC, where a second column is used to remove the buffer ions to enable the sample ions to be more easily detected. A membrane separator is sometimes used.

Non-suppressed IC, where weakly conducting buffers, at low temperatures, are selected and the entire effluent is passed through a detector. Ions are detected above the background signal.